Although children have a chance of becoming injured no matter what sport they play, it is high contact sports, like football, that carry the biggest risks. One of the more dangerous injuries parents need to be aware of and watch out for are football concussions.

The Center for Disease Control and Prevention (CDC) defines a concussion as a type of brain injury that results from some type of blow or hit to the head where the brain was allowed to bounce around inside the skull. This post will focus on the risks, signs and treatments associated with football concussions for teen players. 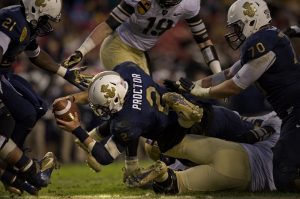 The Risks of Football Concussions

According to the American Association of Neurological Surgeons, an astounding 62,000 concussions are reported each year in high school contact sports, such as football. The site goes on to say that after suffering from one concussion, the risk of a second one is three to six times higher in football players. This is alarming, and a statistic that should really make parents stop and take notice.

PBS.org shared a study that was conducted specifically on high school and college football players. That study found that an estimated 11.2 concussions were occurring for every 10,000 football games that were played among high schoolers. Those in college faired slightly better at just 6.3 concussions per 10,000 games. Parents should take the time to review the statistics before making a decision as to whether it is in their child’s best interests to join the school’s football team.

Students who do go forward with the sport need to learn how to best protect themselves.  Simply putting on a helmet and using a mouth guard are not enough. Time Magazine reported that although there is no helmet on the market that will prevent concussions, there are some available for sale that have proven to reduce the risks. The results of a study done by the Journal of Neurosurgery revealed that the Riddell Revolution helmet lowered a player’s risk of a football concussion by 54 percent. 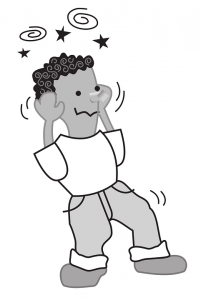 The Signs of Football Concussions

Parents and teens will need to learn what the signs of a football concussion are if the student is going to play on the team. The Mayo Clinic warns that these signs and symptoms may not show up right away, but rather a few days later. The symptoms can even last weeks if the concussion is more severe. A few of the signs they recommend parents watch out for include nausea, headaches, loss of consciousness, vomiting, feeling of confusion, fatigue, and slurred speech.

There are a few more signs that are specific to child football players. Look to see if the student is more irritable than usual, not eating the same amount as they typically do, and losing balance or appearing unsteady on their feet. They may even develop a sensitivity to bright lights and loud noises. If you notice any of these symptoms it is important to see a doctor right away.

The first step in treatment is visiting a pediatrician, or heading to the emergency room. Tests will need to be conducted to determine whether football concussions are the reason for your symptoms. The first test that the doctor will request is a CAT Scan. This imaging of your brain can reveal swelling, bleeding or evidence of a complication that would be a result of a concussion. The second test is done through a blood draw. When a concussion is has happened, a certain protein is present in the blood. In some cases a teen may have a concussion even though their test results come back normal.

After it has been determined that your son or daughter has a concussion, treatment can begin. The doctor will first recommend rest, which may mean missing school for a few days or a few weeks. To give your brain a break, students may also be asked to refrain from reading, watching television, playing video games and using their cell phones until a follow-up examination has been performed. A tutor can be arranged later to help a student catch up if need be.

Because teens may have a headache as a side effect of their football concussion, the pediatrician may prescribe acetaminophen, which is actually the generic form of Tylenol. It is important to avoid taking over-the-counter pain medications, such as ibuprofen or aspirin without first getting permission from your physician. These pain relievers have the ability increase bleeding, which could have serious consequences for someone who is suffering from a concussion.

Players should refrain from returning to the football field until the brain has had ample time to completely recover from the concussion. Your child’s doctor will be able to give you the go ahead when it is safe to return to practice. Neglecting the physicians permission to get back to playing football can be extremely dangerous, especially if the teen ends up with a second concussion before the first one has healed.

Alicia Bodine has been a professional writer for 10 years. She has produced thousands of articles for online publications like Education.com, Time4Learning, Demand Studios, and WiseGeek. When Bodine isn’t writing, she’s busy homeschooling her oldest and caring for her youngest, who suffers from a rare neuro-genetic disorder.