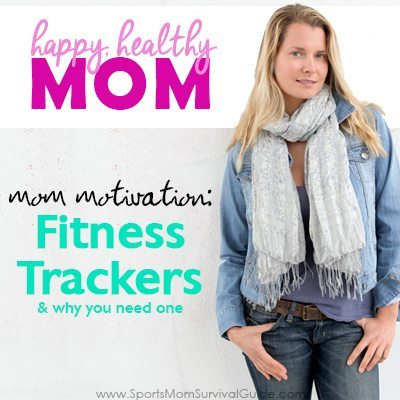 This past spring I decided I would try to get on the band wagon of all those wearing fitness trackers. I asked for a fitness tracker for Mother’s Day. Then I panicked…they are a bit of an investment and I wanted to make sure the one I got was the best one for me!

I spent quite a bit of time researching, asking others about their trackers, reading articles and reviews.  There are so many options available, but I finally narrowed my options down to what seemed to be the best 2 all-around fitness trackers: the Nike FuelBand SE and the Fitbit Flex. 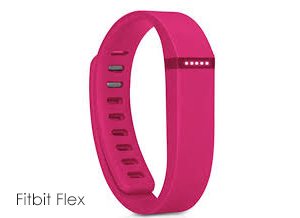 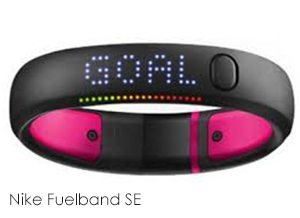 I had a chance to test out both trackers to do a little compare and contrasting.

Nike Fuelband: The Nike Fuelband is similar to wearing a bracelet. It only comes in black with some subtle color options (hot pink,  highlight yellow, orange or black, gold and silver). There is a small display on the top of the band. There are three sizes available S, M and L/XL. Each size comes with two insert links in order to adjust the size.

Fitbit Flex: The Fitbit Flex is made of a soft rubber material. It is available in multiple colors, and it is possible to buy other color options. The tracker itself can be removed from the bracelet to be charged or to change bracelet color. Both the small and large sized bracelets are included with the Fitbit.

My Favorite: The Fitbit Flex was slightly more comfortable right out of the box. The Nike Fuelband took me a few days to get used to wearing it, but after those few days, I didn’t even notice it was on. Both bands are on the same comfort level as wearing a watch.

Nike Fuelband: What I love about the Fuelband is that it doubles as a watch. At anytime I can tell what time it is, allowing me to eliminate wearing my watch. Because there is a display, I can check my Nike “fuel”, active hours, calories and steps at anytime. There is no need to hop on the computer or check my iPhone app to see what my status is.

Fitbit Flex: The Fitbit Flex doesn’t have a “display”, but rather has 5 dots that light up. Each dot stands for having reached 20% or your daily goal.

My Favorite: The Nike Fuelband wins hands-down in this category. The convenience of checking the actual device for the daily progress is fabulous!

Nke Fuelband: You can connect your Fuelband directly into any usb port to charge. You can also connect to an online app that allows you to interact with other Fuelband users,  see the details of your day, identify your workout sessions and make or change your goals. There is also an app for iOS and Android users that allows you to check all the same functions that the desktop app offers. This tracker typically needs recharged about every 5 days.

Fitbit Flex: The Fitbit Flex requires that you remove the tracking device from the bracelet and place it into a charging cable. The charging cable gets plugged into a USB port to charge.  There is also an online app_______ The Fitbit App also syncs with Android, iOS and Windows devices. The Fitbit also allows you to connect with other Fitbit users as well as a large number of other apps to that allow you to track your food (i.e. My Fitness Pal) or your running route (i.e. Map My Run). This tracker needs to be charged about every 6 days.

My Favorite: I like that you don’t need another cord to charge the Fuelband, but on the other hand the connecting to other apps is a huge plus in favor of the Fitbit.

Nike Fuelband: The Fuelband allows you to track:

It also allows you to start and stop workouts and track sleep. On the app, you can identify what type of workout was done (i.e., running, weight lifting, walking, playing football, etc).

My Favorite: The Fitbit Flex comes out slightly on top in this category. As far as actual tracking, both bands are neck and neck in comparison, but because the Fitbit Flex can sync up with other to track food intake, it gives it the edge (if food tracking is important to you).

Nike Fuelband: The band is water-resistant, but not waterproof. It will be fine in the shower or in a rainstorm, but you should remove it before you swim.

Fitbit Flex: This device is is water resistant and can be submerged up to 10 meters, Flex is not designed to track swimming activities. One feature that is not on the Nike Fuelband is an alarm. You can set multiple alarms (it’s a vibrating motion) on the Fitbit Flex. Use it to wake up in the morning, as a reminder to take your vitamins, etc.

When I did a comparison of the two bands, I found that the Nike Fuelband is not as generous in steps. I did a P90x 3 workout in the morning and then did a speed walk in the evening. The trackers were only off about 150 steps  for the entire day, until I started the speed walk.  When the walk was over, the Fitbit gave more 1,500 more steps than the Fuelband. The calories also varied drastically. The Fuelband showed 700+ calories burned vs. 3,000+ on the Fitbit. It’s hard to know which one was more accurate! 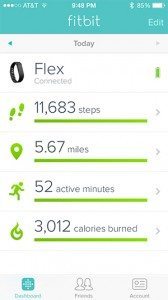 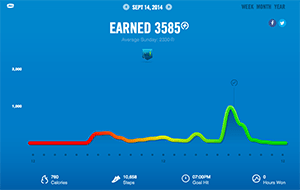 WHICH FITNESS TRACKER IS RIGHT FOR YOU?

So which fitness tracker is right for you? I feel like both are great options, but you will need to weigh which features that are not included on both trackers are more important to you.For me, I didn’t want to have to wear a watch and a tracker, the Nike Fuelband  works as both for me. I also like that it has a display and I don’t have to grab my phone to see how many steps I have gotten in for the day. Currently, I am in tracking my food intake using My Fitness Pal.com. It would be nice for it to sync to my Fuelband, but it’s not a necessity.

From a financial standpoint, both trackers are $99. The Nike Fuelband SE came down in price from the original $149 which makes it much more competitive in price with other fitness trackers.

Ultimately, my overall goal was to become more aware of how much movement I was getting in a day and to make sure I was taking 10,000 steps. Either of the fitness trackers would do what I was needing, motivation. It gets me up and out of my office multiple times a day to take a quick walk around the block with the dog and adds to my total number of steps. It helps me to set goals and reach them. Without a way to track my movement, I would never know if I had met my goals!