Instant noodles were a mainstay of my childhood. Whenever I was in charge of finding my own food, like every other nine through fifteen year old, I wanted something tasty and wanted it right now. Back then, being blissfully unaware of the importance of things like protein/carbs, vitamins/minerals, and nutrition in general, lead me to consuming my fair share of Mr. Noodles.

As I got older, my priorities with respect to my health began to change. In my late teens, my high-school gym coach introduced me to the weight room and taught me a bit about diet. From 16 and onward, my diet shifted to prioritize protein and clean carbs.

Sadly, that meant that my love affair with a bowl of ramen noodles died. Until now.

Have Your Cake & Eat it Too? 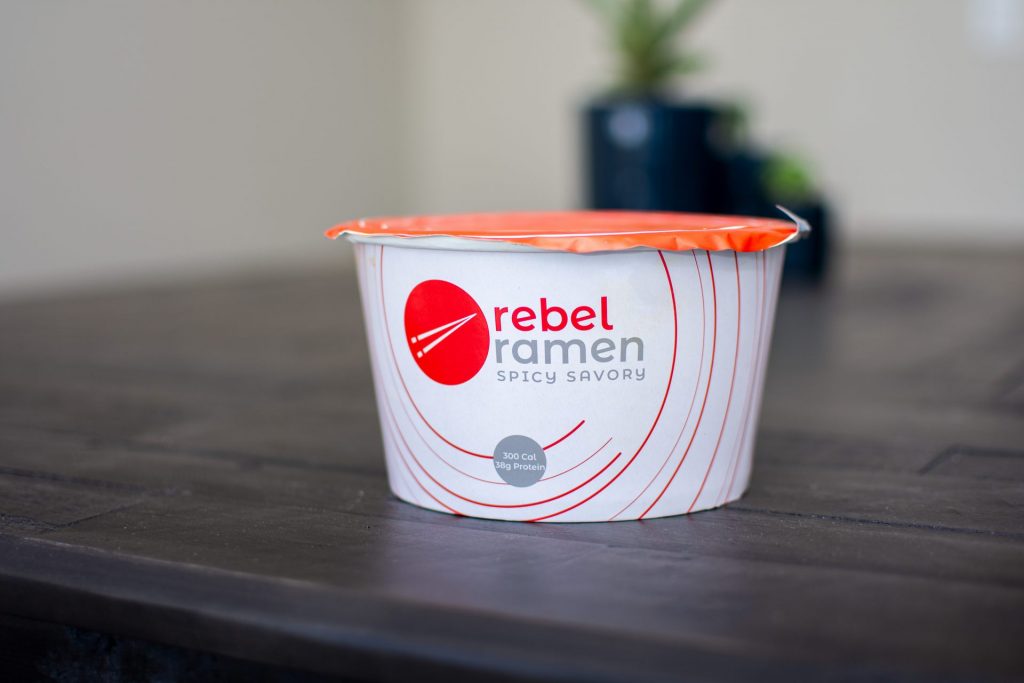 I came across the Rebel Ramen Kickstarter during one of those late-night deep-dives into the depths of the internet- you know the type. Somehow I wound up on a page selling me on the merits of this new instant noodle. I found myself with a few new itches I now wanted to scratch:

Rebel Ramen’s value proposition hinges on the successful delivery of an affordable, macro-friendly, high-protein bowl of instant noodles… that also tastes good. That’s a tall order, so I thought I’d order a bunch and see how they went down. Today’s the day we find out.

Pasta has been more or less totally absent from my diet for nearly a decade, reserved for infrequent cheat meals and special occasions (you don’t say no when your Grandma/Mom/etc. makes a batch of homemade lasagna, amirite?). That’s because my “ideal” macro-nutritional breakdown is about 40% protein, 30% carbs and fat respectively- with a total daily caloric budget of 3,000 calories. I also want to ensure I get around 130 grams of protein per day, with fruits, vegetables, and rice as my primary sources of clean carbs.

On paper, Rebel Ramen looks like a great snack or post-workout meal that totally fits into my diet. It packs a good portion of protein, and at about $3.50 per bowl, it costs roughly the same as a decent protein bar.

Given that Rebel Ramen is being marketed as instant ramen for swole people, let’s see how it stacks up compared to a comparable serving of Mr. Noodles.

Both flavors have great macros, and anybody counting carbs or trying to hit three-figure protein figures will love the above.

38g of protein for just 300 calories is a great ratio, and all that protein comes from black beans. About half of its 34g of carbs come from fiber, and with just 3-4 g of sugar, just about everyone can enjoy a bowl and have it work into their diet just fine.

Also notable is the 191mg of calcium per bowl. Most people under consume how much calcium they should be getting (1,000mg per day for most people).

A single package of Mr. Noodles is considered two servings, so double the figures shown in the table.

At 380 calories/package, the total calorie count is still pretty low (the 80 calorie difference compared to Rebel Ramen isn’t really a big deal), but when you consider that you’re basically eating 380 calories of nothing, things don’t look good for Mr. Noodles.

Instant ramen noodles are basically starch, salt, and processing. It’s a low-calorie snack that doesn’t have much to it from a nutritional point of view. But, what ultimately makes Mr. Noodles/instant ramen a dealbreaker for me is the 58g of carbs per package, which is pretty high considering all the points against it nutritionally.

58g of carbs, no fiber, and a small amount of protein- and all that for just under 400 calories? Pass. 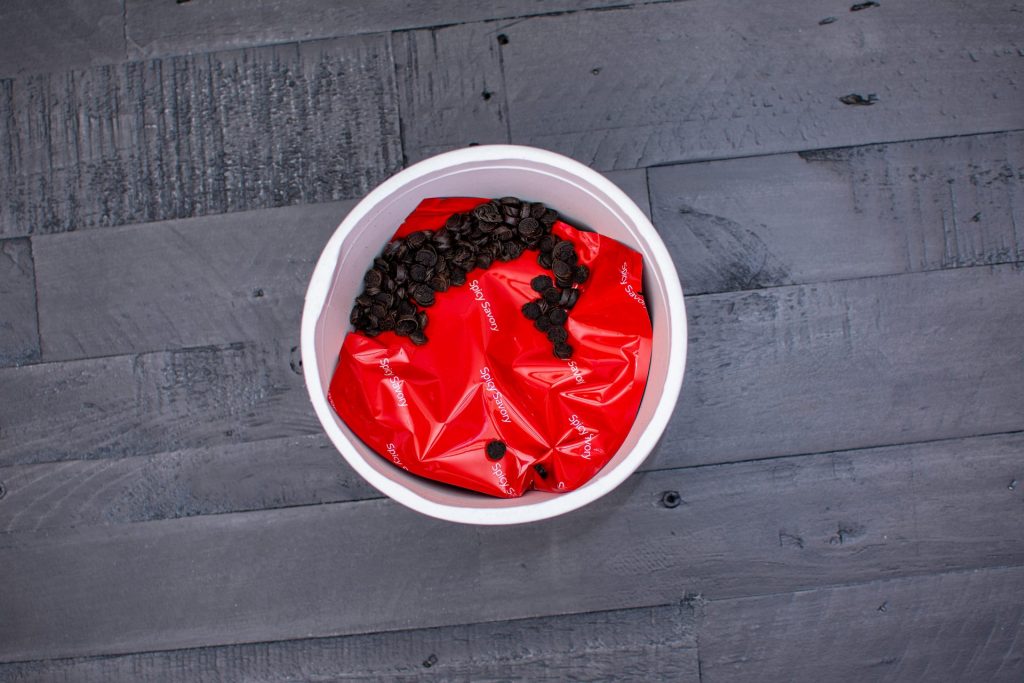 My twelve bowls of ramen – six Spicy Savory and six Miso – arrived neatly packaged in a large box. After stashing a few away, I decided that there was no time like the present to try a bowl and settled on trying Spicy Savory as my first go. 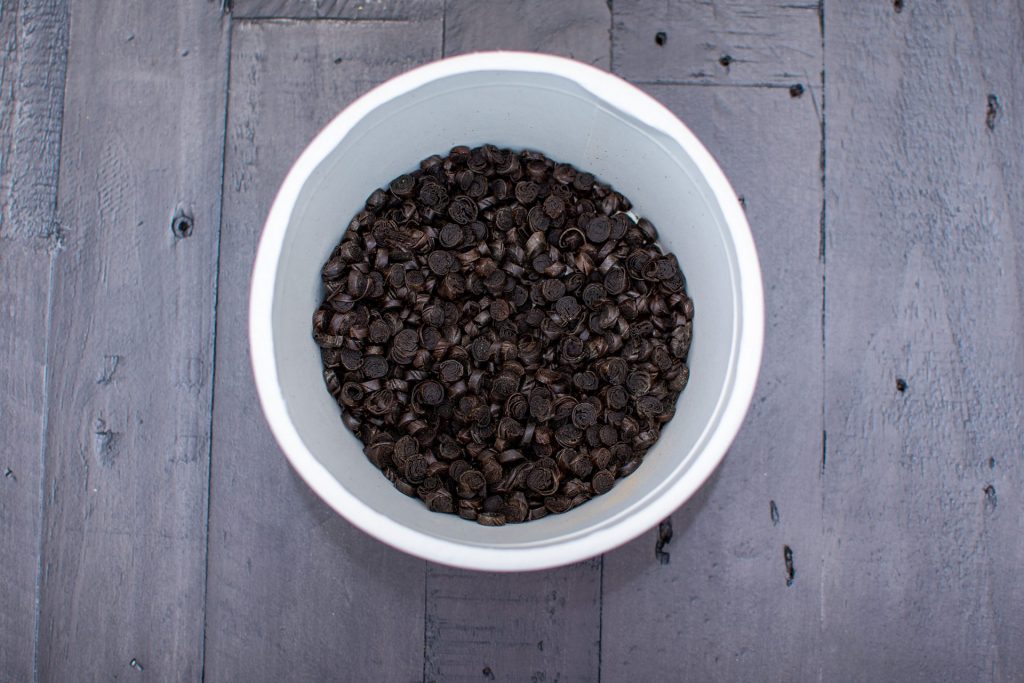 The first clue that you aren’t actually eating ramen is the noodles, which look like dark round buttons. They uncoil as they are cooked, transforming into the traditional noodley shape we all know and love. 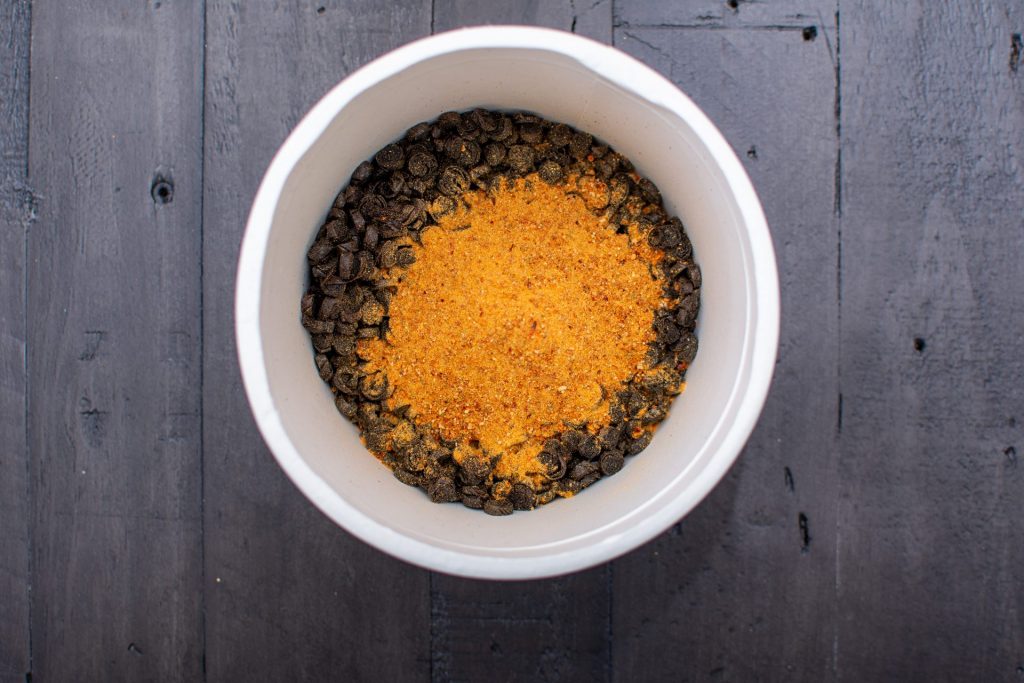 The portion of flavor powder seemed to be a lot considering the size of the bowl and volume of noodles, but I figured I should have it as-is before I start adjusting the amount.

Bonus perk: the bright orange flavoring powder against the dark noodles and the dark grey wood of my table made for an interesting photo opportunity. 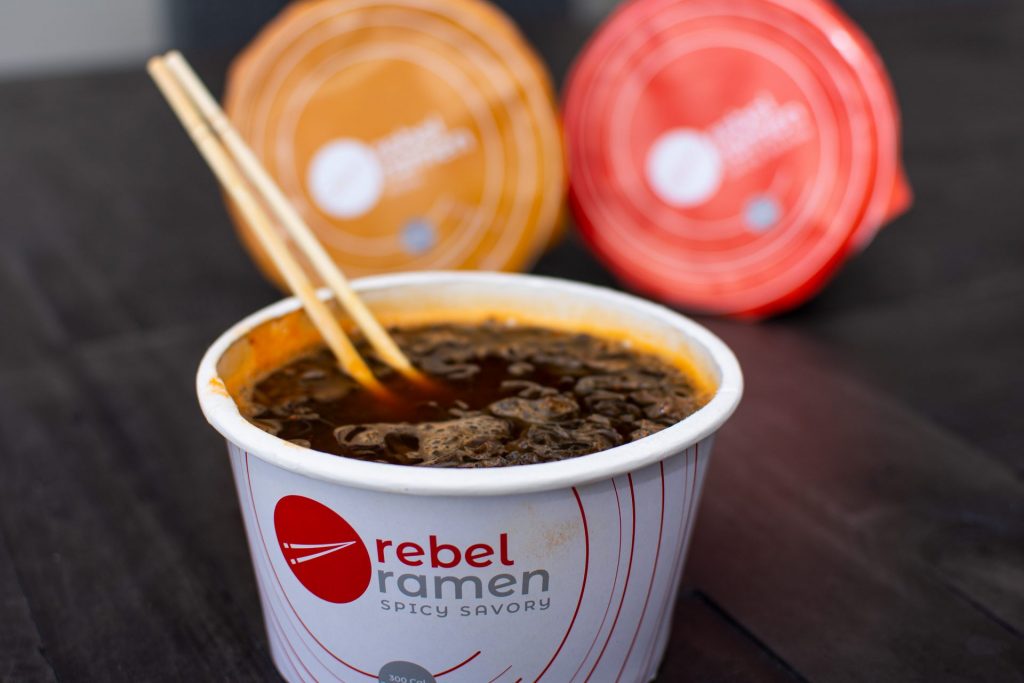 Add some hot water to the mix, wait three minutes, and you’re good to go. The first bite was, well, surprising.

My second observation: the texture is very different than ramen.

My third (and final) observation: this is delicious.

The Spicy Savory broth, while salty, brings a punchy-but-not-quite-spicy flavor to the dish, and the Miso flavor is very close to what you’d expect a decent bowl of miso soup to taste like. I recommend dialing back the flavor powder by about 10%, which still gives a strong flavor that is tangibly less salty.

Rebel Ramen may not be a perfect replica of the classic instant ramen noodle taste and texture, but it’s a very passable facsimile that you can eat guilt-free. For people with busy families or active schedules that want something delicious, quick, and good for you… Rebel Ramen is an interesting addition to your pantry.

At $3.50/bowl, I’m incorporating Rebel Ramen into my diet. It tastes good, is portable, and doesn’t take much effort to prepare. It’s not often that you get to have your cake and eat it, too.

Cameron is an advocate of a healthy lifestyle and enjoys strength training and biking. He's colorblind, but don't remind him of that or he'll turn red (or so he thinks).